Gladstone & Disraeli Clash of the Titans

An engrossing portrait of two of the 19th century’s greatest politicians and Prime MinistersWilliam Gladstone and Benjamin Disraeli, and their struggle to outdo each other over 40 odd years. Presented by Huw Edwards, this extensive film concentrates on how these two ambitious and patriotic men changed the course of British politics, Gladstone by creating the Liberal Party, Disraeli by formulating a more progressive notion of Conservatism that would last well into the 20th century. Huw Edwards presents a documentary examining the relationship between Victorian prime ministers Benjamin Disraeli and William Gladstone, whose bitter personal rivalry dominated British politics for 40 years. Disraeli was a peacock with an elegant wit and an outsider who made it to the top, while Gladstone was an insider and a stern moralist who chopped down trees and saved fallen women, and the two of them drove each other onwards and changed the face of British politics.

Episode 6 How to Travel Through Time 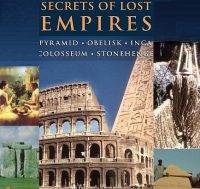